Does My “But” Look Big In This? 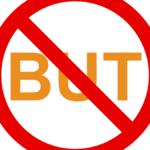 Once you start looking for big buts it’s hard to miss them. They are absolutely everywhere. I can’t help but notice that the biggest buts belong to the people who achieve the least. It seems such a shame that one big but is all it takes to put a person on the path to no place in particular.

Don’t believe me, take a look at these;

It’s rational, even sensible in some cases, but in most it really just acts as a handbrake, it stops us from getting where we want to go. Look what happens when we change those statements above to;

So, as simple as this may sound, the first step to achieving meaningful outcomes is to look at the first part of the sentence, the thing that you say you want. Ask yourself what doing these things would do for you. What difference would they make to your life, your happiness, your success or your health? Are the things that we say we want, the things that we really want?

If they truly are your heart’s desire, you don’t have a reason not to succeed anymore. I am not going to tell you that suddenly everything will become easier, though it might, but I can tell you that once you are truly committed to an outcome, barriers become just that, barriers. They may be testing to overcome, your outcome may not be quite as you’d imagined, but you will achieve an outcome that you had previously decided was not even possible.

Try this for yourself. Listen to what you say, both out-loud and in your head or your mutterings. Listen to how other people limit themselves with their BUTs.